New Links was founded in 2006 by Kenny Wood of St Andrews and George Davis of Los Angeles. Both were inspired by the way Charlie Sifford (1922-2015) overcame prejudice with dignity, perseverance and courage. Charlie Sifford visited St Andrews in 2006 to be part of the first New Links youth visit and to receive an honorary degree from the University, which was sponsored by Wood.

Charlie Sifford stated: “I want golf to realize its potential as the greatest sport on earth for people of all ages and backgrounds to play…I want golf to reach out to people from all walks of life and to be the sport that puts itself above issues of race and class and economic levels. We should give everybody equal access to the game, with equal facilities to play, and we should give them the same opportunities to pursue the game throughout their lives”.

Charlie Sifford travelled a long and complex path, which took him from Charlotte, North Carolina, to the White House to receive the Medal of Freedom from the President of the United States. Along the way, he called in to St Andrews and we feel privileged to have been here when he did.

Kenny Wood said: “It is my dream that the challenge and inspiration of Charlie Sifford’s life will bring out the best in young people who visit St Andrews for years to come”.

George Davis said: “Charlie Sifford’s difficult journey through the PGA was a true inspiration to both Kenny and I. While we were proud of our role in Charlie obtaining his honorary degree at St Andrews, we were equally pleased by the impact of his visit on the young, inner-city golfers that made our first trip to Scotland. His gruff voice, fondness for fine cigars and ability to persevere will stay with us forever”.

Kenny and George first met when they happened to be seated together on a transatlantic flight. George said: “I feel that Kenny and I coming together was a testament to both of us stretching out of our comfort zones and engaging with someone from a different background and then becoming friends. We WERE unlikely co-founders but that’s the whole point of New Links”. 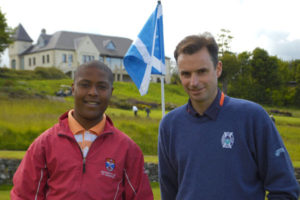 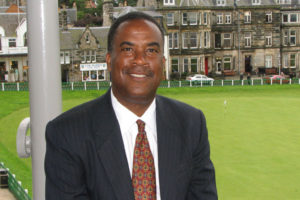 New Links co-founder George Davis of Los Angeles during a visit to St Andrews. He is pictured overlooking the Old Course from the balcony of the Royal and Ancient Golf Club.